Back issues of old periodicals to be digitized by Internet Archive

In January of 2020 we learned that the Anaheim campus was relocating to the Fullerton campus. To make room for two new classrooms and three staff offices in the library space some major changes had to be made. The back issues of periodicals (magazines and journals) as well as the reference books all had to find new homes in the already full first floor shelving.
For many years these two collections have been whittled away little by little. 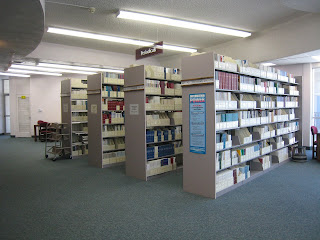 In the case of print periodicals, many are available as online versions and others are available either in total or part within subscription databases such as ProQuest and EBSCOhost. But not all of them.
Further, the cost of periodicals has continued to rise well beyond the library's ability to keep up world-wide, requiring us to make decisions to not renew costly subscriptions every year.
Limited space has also required us to discard older issues every summer to keep from expanding beyond our shelving capacity.
So, we have been methodical in our maintenance and reduction of print periodicals and we began a more aggressive focus to reduce the footprint from 40 sections of shelving to 6. We reviewed our retention policies and started to pull some older issues off of the shelves ahead of our normal annual schedule.
But then COVID-19 hit in mid-March sending the library staff and student work force home. With the library closed, it seemed like a good time to start on the construction. This left the job of emptying the shelves to the construction crew so they could accomplish their task.
When the library staff was able to return to campus in July, there were hundreds of boxes stacked in the middle of the library. As we began to unpack, it became increasingly clear that we had much more weeding to do in order to fit them in the new shelving location on the first floor.
Then what were we going to do with the issues we were not going to keep? We ended up with 191 boxes of unwanted back issues of periodicals! 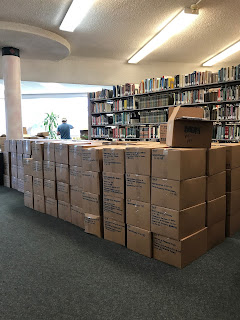 Thankfully, a colleague who had recent experience downsizing a library put us in touch with the Internet Archive. They offered to take our back issues, digitize them, and make them available on a Controlled Digital Lending basis. And they could pick them up in a short period of time at no cost to the university.
The need to free up space faces the majority of libraries world-wide. The preference of users for online resources is unquestioned. The copyright concerns are arguably resolved by the Controlled Digital Lending policy of the Internet Archive.
See the Internet Archive blog post about it here.
Posted by Robin Hartman at 2:53 PM

Email ThisBlogThis!Share to TwitterShare to FacebookShare to Pinterest
Labels: About the Darling Library, Future of Libraries, News, Resource Sharing

Connect with the Library